Which devices work with Toontastic?

Toontastic works on phones, tablets, and select Chromebooks. You can download the app on the Google Play Store and Apple App Store.

You bet. The only feature requiring internet access is the idea lab, which showcases awesome cartoons by other kids.

The in-app text is English-only, but that shouldn’t stop anyone from making a great cartoon in another language. Pig Latin orfay ethay inway!

Can kids create their own characters and settings?

Kids can draw their own characters and settings, customize existing Toontastic characters, and even add their faces on characters to themselves in the story.

How long does it take to make a cartoon?

It takes about a minute to make a one-minute scene and you can add up to six scenes per cartoon. Pretty cool, huh? As for creating your own characters and settings, well, no promises there :)

Can you save and export creations?

Of course! Simply tap Export below your finished cartoon. It will save to the photo library, or Photos app, on your device.

Toontastic 3D is a playful storytelling app that scaffolds the creative writing process and empowers kids to create their own animated cartoons. While Toontastic was not specifically designed for schools, we have heard from a lot of educators over the years that they love how the app sparks their students’ imaginations and uses the Story Arc to help frame their writing. Their students use the app for creating everything from book reports to news broadcasts and foreign language skills.

Is Toontastic for a certain age?

Toontastic is for the playful storyteller in all of us! (but it’s especially great for kids aged 6-12).

What can Toontastic be used for?

We hear about new creative uses of digital storytelling everyday! Book reports, science reports, historical reenactments, biographies, vocab/dialogue practice… the list goes on and on. Check out some of the great videos folks have shared with us. Toontastic can also be used by educators to create tutorials, explain projects, or even do morning reports.

A Story Arc is a scaffolding tool that helps you map out a story's plot. Whether they're learning Language Arts or Science, kids can practice communication skills using story arcs as formulas for convincing arguments.

Does Toontastic collect any personal information?

The cartoons you create in Toontastic can include personal information (photos and voice). This data is saved locally in the app. However, Toontastic does track general usage statistics (like "how many cartoons were created worldwide today") to help improve the app and inform future development. This data is collected in accordance with Google's Privacy Policy.

Do kids have to submit their email addresses?

Cartoons are not shared with Google, but saved locally in-app and on device unless you delete or export them to the photos app or library on your device. 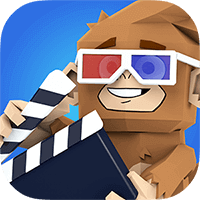 Download Toontastic 3D for your tablet, phone, or Chromebook

*pseudo-scientifically calculated by a cartoon monkey